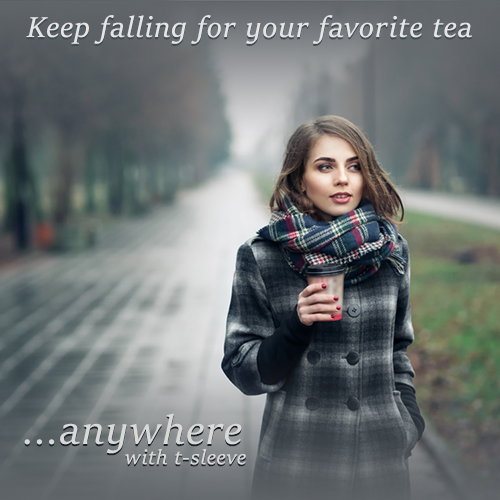 There is no doubt about it. Fall is here and that means spices, brisk air, sweaters and scarves, and most importantly, tea on a cold morning. There is something just so comforting about holding a hot cup of tea and watching the rain fall.

Fall also means many flavors come into season, Apples and Pumpkins galore! Here are some of my favourite flavors.

There is a reason Pumpkin Spice flavored anything is so popular. It smells so good! Who doesn't want to surround themselves with the smell of delicious and warm pies! There are many brands out there who sell Pumpkin spice tea. Some are made with black tea so you can get that caffeine kick, and you can find some herbal teas that offer this delicious flavor too!

Another favorite Fall flavor is Apple Cider. The crisp sweet taste of fresh apple cider is one of my favorite things about Fall. Apple Cider tea is just as amazing. It's aromatic and takes you to the apple farm without having to leave your home. Or you can take it with you in a thermos and enjoy it on the go!

Finally, Cinnamon has a way of relaxing and invigorating me making it one of my favorite flavors. And the best part is it can be incorporated into any tea. Add a piece of cinnamon to any pot of tea and the smell alone is sure to send you to our happy place.

Now with these ideas in your head, you can be prepared for Fall and all of the delicious tea options.

Fall For Your Favorite Tea Accessory~T-Sleeve 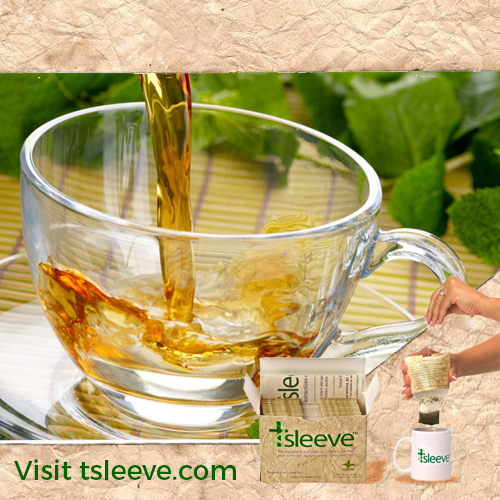 Tea has been known for having some health benefits. Do you know what they are? Here are 10 health benefits that have been associated with drinking tea. Bottoms up!

Antioxidants work to prevent the body’s version of rust and thus help to keep us young and protect us from damage from pollution.

2. Tea has less caffeine than coffee

Herbal blends have no caffeine, while traditional teas have less than 50 percent of what typically is found in coffee. That means you can consume it without those pesky effects on your nervous system, says Leslie Bonci, nutritionist and owner of Active Eating Advice.

3. Tea may reduce your risk of heart attack and stroke

“There’s a lot of literature out there on tea and heart health,” says Anna Ardine, clinical nutrition manager at Magee-Womens Hospital of the University of Pittsburgh Medical Center. “This is a health effect for which there is the strongest evidence.”
In fact, a study published earlier this year that combined data from a host of earlier reports found a nearly 20 percent reduction in the risk of heart attack and a 35 percent reduced risk of stroke among those who drank one to three cups of green tea a day. Those who drank four or more cups of green tea daily had a 32 percent reduction in the risk of having a heart attack and lower levels of LDL cholesterol.

4. Tea may help with weight loss

Research on this isn’t as strong, Ardine says, adding that studies that have shown an effect have depended on consumption of large amounts of tea, often in pill form.

5. Tea may help protect your bones

6. Tea may keep your smile bright

“Japanese researchers have found that tea can decrease tooth loss,” Ardine says. “It changes the pH in your mouth when you drink it and that may be what prevents cavities.” Beyond that, tea, unlike many other beverages does not appear to erode tooth enamel, Bonci says.
7. Tea may boost the immune system
Studies have shown tea can tune up immune cells so they reach their targets quicker.

Studies on this are currently mixed, which means more research is needed, Bonci says. But, in the meantime, “if you’ve got a strong family history of cancer and you want to do anything you can, you might increase your tea consumption,” she adds.

“Herbal teas, in particular chamomile, can be good for people with irritable bowel syndrome because it is an antispasmodic,” Bonci says. “And ginger teas can calm nausea.”

10. Tea — unadulterated, that is — is calorie free

“It’s a great no-calorie alternative to water,” Bonci says. “It provides so many options for flavor and versatility. You can have it hot or cold. And you don’t have to put anything in it, though you might want to add a cinnamon stick or some ginger. That means you’re able to hydrate with something other than water alone.”

Enjoy Drinking Tea? Try the Best Tea Accessory for enjoying mess-free tea while on the go, with t-sleeve. Order your t-sleeve today at: www.tsleeve.com/purchase-t-sleeve.htmlSRC: www.today.com/series/one-small-thing/top-10-health-benefits-drinking-tea-t81111
Posted by Unknown at 3:36 PM No comments: 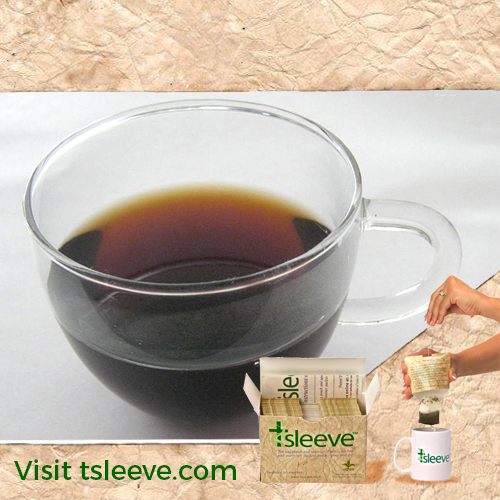 Pu-Erh tea is a type of black tea that is fermented, giving it a unique flavor and health benefits that you wouldn't find in other teas. First developed in the Yunnan province of China it has been used as and prized for the health benefits for thousands of years.

One of the touted benefits of pu-erh tea is its ability to lower cholesterol. A study published in the journal “Experimental Gerontology” in 2009 found that rats given pu-erh tea saw a profound reduction in LDL, or “bad” cholesterol, and an increase in cardioprotective HDL cholesterol. Pu'erh tea has also shown great benefit for people suffering from metabolic syndrome – a group of risk factors for cardiovascular disease which include high blood pressure, low HDL cholesterol, high fasting blood sugar, high triglycerides and abdominal obesity. Researchers at Beijing University discovered that pu'erh tea appears to treat metabolic syndrome by improving obesity, beneficially adjusting blood lipids, lowering blood sugar and preventing oxidation of cholesterol plaque.

The antioxidant actions of pu'erh may also make it useful in treating tumors, according to in vitro research published in the “International Journal of Molecular Science” in 2011. Researchers discovered that pu'erh tea inhibited tumor growth through a variety of mechanisms, indicating that it may have the same capabilities in humans. There has been a great deal of research on the antioxidant effects of green tea, but fewer studies have been conducted on pu'erh. Research published in the “Journal of Agricultural and Food Chemistry” in 2004, however, showed that pu'erh tea exhibited a similar amount of antioxidant activity as green, black and oolong teas.

Enjoy Drinking Tea? Try the Best Tea Accessory for enjoying mess-free tea while on the go, with t-sleeve. Order your t-sleeve today at: www.tsleeve.com/purchase-t-sleeve.html
SRC: healthyeating.sfgate.com/health-benefits-puerh-tea-9706.html
Posted by Unknown at 3:53 PM No comments:

Flavored Tea And It's Benefits 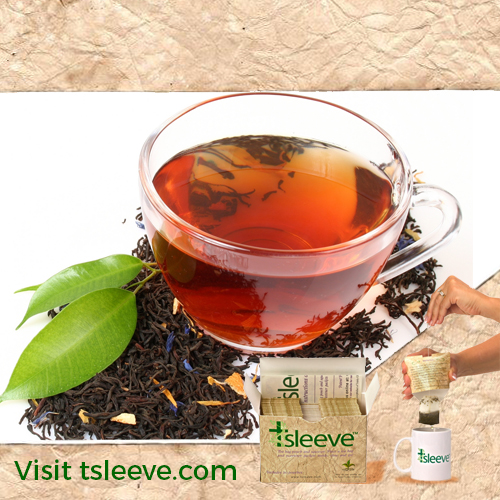 Out of the many different types of tea, one that is very popular is flavored tea. These teas are often combined with different types of tea leaves and aromatic ingredients. These combinations of ingredients can sometimes offer more antioxidants, and can be more enjoyable. With fall just around the corner, anything with cinnamon or clove would be a good choice for a colder day.


The scoop: In this category, aromatic extras, such as cinnamon, orange peel, and lavender, are paired with black, green, or white tea leaves.
Health benefits: Flavored teas have the same levels of antioxidants and the same health benefits as unflavored ones. Those flavored with superfruits, such as blueberries, may contain even more antioxidants, says Lisa Boalt Richardson, an Atlanta-based tea expert and the author of The World in Your Teacup. But skip the sweetened varieties in bottles: You’re better off without that extra sugar, says Baer, who also cautions that flavored tea drinks are often watered down. “Some have such a low amount of antioxidants that you would have to drink 20 bottles to get the amount you would in a single brewed cup,” she says.


Enjoy Drinking Tea? Try the Best Tea Accessory for enjoying mess-free tea while on the go, with t-sleeve. Order your t-sleeve today at: www.tsleeve.com/purchase-t-sleeve.html
SRC: www.realsimple.com/health/nutrition-diet/healthy-eating/types-of-tea/flavored-tea
Posted by Guy Edwards at 2:08 PM No comments:

The Health Benefits Of Peppermint Tea 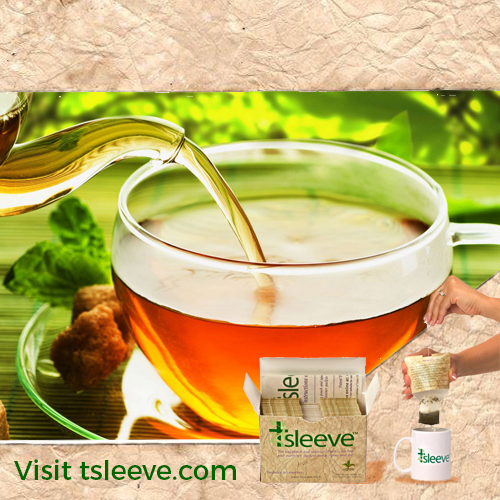 Peppermint tea is probably one of the most popular herbal teas out there, both for its' taste and the health benefits. Even some of the most ok teas still taste pretty good. With the added benefit of being able to help with indigestion and relaxing, this kind of tea is great if you are just starting out in the vast tea drinking culture.

Enjoy Drinking Tea? Try the Best Tea Accessory for enjoying mess-free tea while on the go, with t-sleeve. Order your t-sleeve today at: www.tsleeve.com/purchase-t-sleeve.html
SRC: www.teadiscussion.com/health/peppermint.php
Posted by Unknown at 3:40 PM No comments: 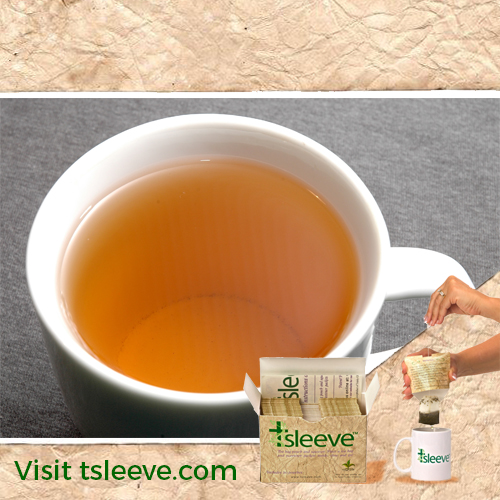 Tea has been a part of many cultures for thousands of years. There are many different types of tea, and they each have their own aroma and flavor. White tea is among the most delicate of flavors using very young shoots to produce its' subtle flavor.


White teas are the most delicate of all teas. They are appreciated for their subtlety, complexity, and natural sweetness. They are hand-processed using the youngest shoots of the tea plant, with no oxidation. When brewed correctly, with a very low temperature and a short steeping time, white teas can produce low amounts of caffeine. Of course, steeping with hotter temperature and longer time will extract more caffeine. But by definition, white tea does not have less caffeine than other teas.


Enjoy Drinking Tea? Try the Best Tea Accessory for enjoying mess-free tea while on the go, with t-sleeve. Order your t-sleeve today at: www.tsleeve.com/purchase-t-sleeve.html
SRC: www.teasource.com/pages/types-of-tea

Posted by Unknown at 8:00 AM No comments:

Take Your Tea On The Go! 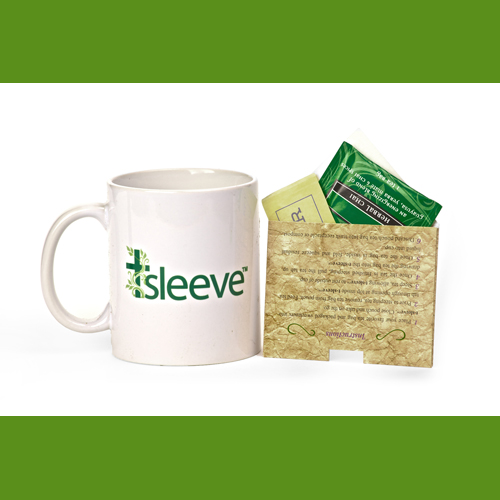 Enjoy your tea mess free, with t-sleeve! It allows you to take your favorite teas on the go, without the mess!


T-sleeve® is a brand new, complementary product for tea drinkers who use tea bags. T-sleeve® was created from a vision to enjoy a mess-free, tea drinking experience.
This handy design starts as a carrying pouch for your favorite tea bag and package sweeteners. Take it with you on the go to work, a restaurant or meeting a friend for a cup of tea. T-Sleeve® then becomes a tea bag squeezer when you steep your tea. After you have steeped the tea, simply pull the tea bag up into the t-sleeve®, fold and squeeze the residual liquid out, and then discard. There’s no mess, no wet fingers and no drippy tea bag. T-Sleeve® is made of recyclable and compostable materials, so simply dispose of the t-sleeve® and tea bag into the garbage or compost container. T-Sleeve® will compost, so you can feel good about making a difference in the environment.
One more way to feel good when you use a t-sleeve® is the lives you will touch just by enjoying a mess-free cup of tea. We are dedicated to enriching lives, not just enhancing your tea drinking experience. We will be putting our profit to a good use. Ten percent of all net profits of the original t-sleeve® will go to help Foster Children both locally and nationally. T-Sleeve® was specifically created to help others through charities that enrich lives, sharing love, hope and faith person to person.

Click here to get t-sleeve today!
Posted by Unknown at 3:30 PM No comments: