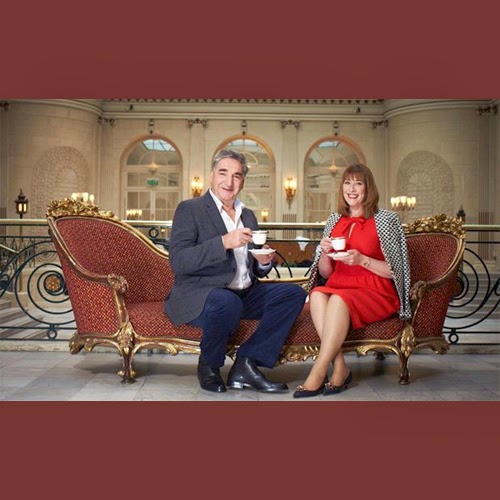 Jim Carter has been nominated for Outstanding Supporting Actor in a Drama Series for Downton Abbey for the third year in a row. In Downton Abbey, Jim Carter plays Mr. Carson a butler to the Crawley family. Here we see him drinking tea with Phyllis Logan, aka Mrs. Hughes at the Waldorf hotel in London. After the 2014 Emmys perhaps we will see Jim Carter drinking his tea with a t-sleeve® from the Emmy Swag Bag. Read more about Jim's cuppa tea in London below.


It's not every day you get to sit down for a cuppa with Mr Carson and Mrs Hughes, now, is it? Normally those two make sure their daily catch ups are a private affair, with the Abbey's gossip and potential scandal being shared behind closed doors.

SRC: View more photos of Jim Carter and Phyllis Logan enjoying tea at:  http://www.radiotimes.com/news/2013-12-19/taking-tea-with-downton-abbey
Posted by Unknown at 9:37 AM